Marjorie Sewell Cautley (1891-1954), the landscape architect who designed the plantings across the Sunnyside Gardens Historic District, was recognized with an honorary New York City street sign on November 21, 2015. An enthusiastic multitude from around the city and across the country gathered at 45th Street and Skillman Avenue to applaud when Lee Hill, Cautley’s granddaughter, and Dr. Thaïsa Way, the foremost scholar of Cautley’s career, joined City Council Majority Leader Jimmy Van Bramer to unveil the new sign. Former Parks Commissioner Adrian Benepe spoke admiringly of the woman he believes to be the first landscape architect honored in this way by the City. She is the second of Sunnyside Gardens’ planners awarded this distinction, following Lewis Mumford. 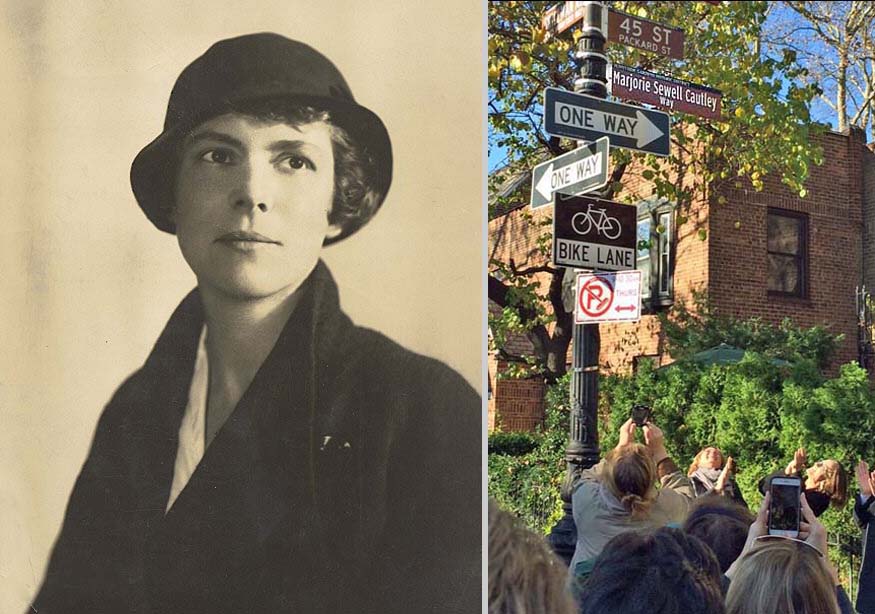 Left, By her late 30s (about 1930), Marjorie Sewell Cautley had completed her landscapes for Sunnyside Gardens and would soon undertake those for Phipps Garden Apartments; courtesy #4908, Division of Rare and Manuscript Collections, Cornell University Library. Right, our local paparazzi spring as her street sign is revealed; photo by Arthur Pearson.

One of the first generation of women to break into the predominantly male profession of landscape architecture, Cautley earned her B.S. degree from Cornell University in 1917. Various projects before the mid 1920s led to her joining the distinguished group of men who were building Sunnyside Gardens. Over the next 12 years, she designed the famous landscapes in Sunnyside Gardens, Phipps Garden Apartments, Radburn in New Jersey, and Hillside Homes in the Bronx. Eighty years ago this year, she published her book, Garden Design. Her legacy includes articles in many magazines, CCC projects, teaching at Columbia and MIT, plus special collections at Cornell, Columbia, and the University of Pennsylvania, where she completed a master’s degree in city planning.

Any street in the Historic District could rightly have honored her name, but 45th Street is uniquely appropriate. On both sides of the street, the London plane trees that are emblematic of the Gardens’ streetscapes were placed not at curbside but within the front gardens of the homes, which has helped the trees to grow larger and healthier than street trees elsewhere. Beyond these London planes, Cautley planted groves of ginkgo trees in private rear yards along four lanes through the blocks off 45th Street, in Washington and Lincoln Courts. In addition, her mature allées of planes distinguish Washington’s south court, and some willows in Lincoln testify to the many she originally planted there.

Following the unveiling, we walked through the neighborhood with Thaïsa Way and Adrian Benepe to spot examples of Cautley’s historic plantings. 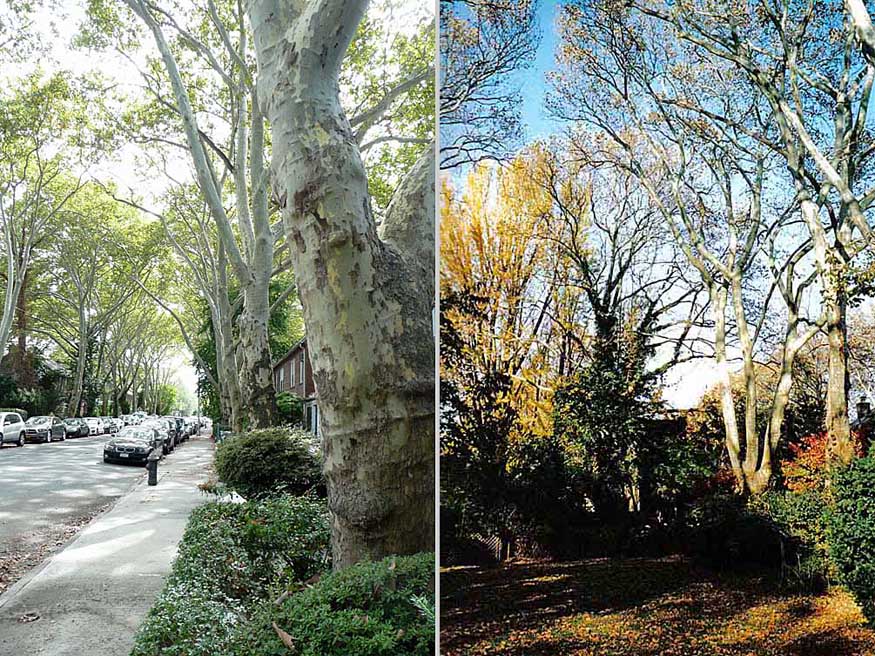 Above left, What we think of as the “street trees” on 45th Street are planted inside private front gardens, where a privet border is a further vestige of Marjorie Cautley’s design. Above right, Her ginkgoes in the blocks off 45th Street are best appreciated in fall in the south court of Washington Court—but as we observed, Jefferson Court’s two northern gardens offer stunning displays, as do the walls of Phipps Garden Apartments: below right is the 50th Street row. Below left, Weeping willows were Cautley’s dominant species in Lincoln Court, as this 1957 family photo suggests (looking across a private rear garden into the north court, courtesy of Ruth Horowitz). While willows are short-lived, thoughtful re-plantings can be seen in Lincoln’s center court and Roosevelt’s north. 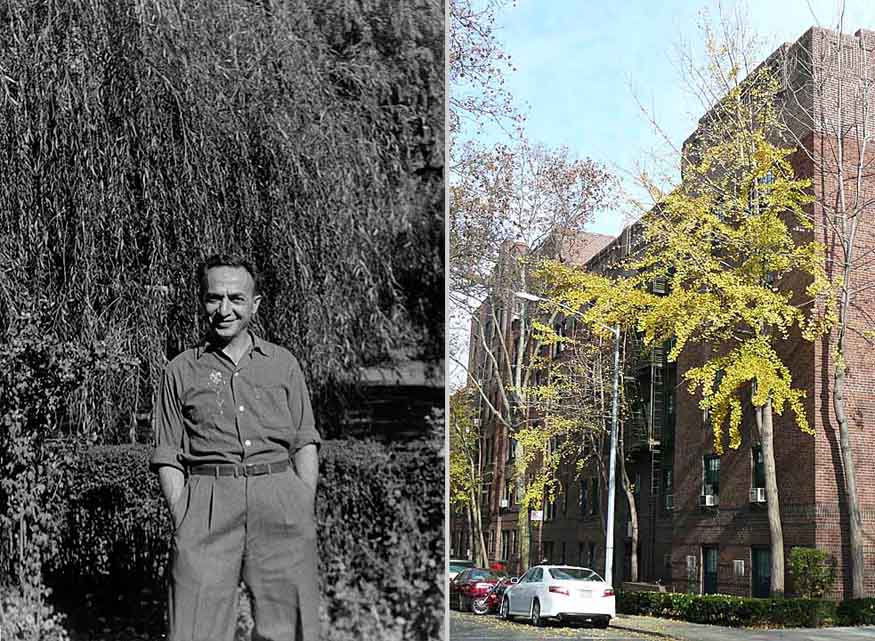 We observed that the north court in Jefferson Court may offer the best preserved example of Cautley’s landscape designs in the neighborhood, with its symmetrical arrangement of yews, ginkgoes, and hydrangeas. You’ll find more illustrations of her plantings by exploring images and video on other pages of this website. Download a PDF copy of our program for the street sign dedication—it contains Thaïsa Way’s description of Cautley’s work in Sunnyside Gardens and Phipps. For Dr. Way’s definitive article on Cautley’s entire career, click here. 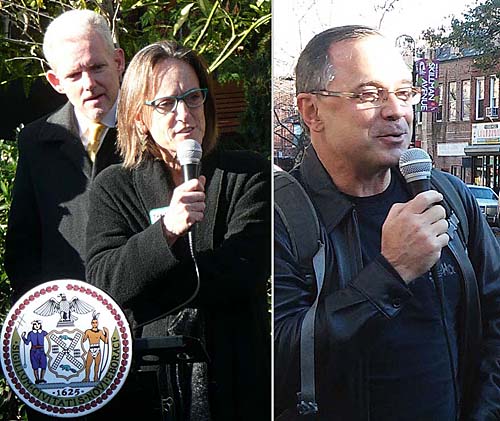 Above, Speakers at the unveiling, Councilman Jimmy Van Bramer with Thaïsa Way of the University of Washington, who has contributed most to our understanding of Cautley’s importance, and Adrian Benepe, who brought his consummate experience with the Parks Department and roused us by advocating a park on the site of the old Phipps playground. Below, At the reception, Cautley’s drawings for Phipps landscapes (on the table in the foreground) commanded as much interest as the refreshments (in back); photo by Allison Smith. A sketch of her designs for the Dutch, Italian, and English gardens in Phipps’ northern addition was printed in the June 1936 Sunnyside News, the neighborhood newspaper. We were able to document original species that persist in Phipps’ great center court, including one American elm among the ginkgo, linden, and cherry trees; and in the northern gardens, the venerable wisteria arbor and nearby hydrangeas.