During Sunnyside Gardens’ ongoing celebration of the 90th anniversary of our construction (1924-1928), there are many important founders to be grateful for. In 2016, none is more important than Alexander M. Bing.

In 1926, builders completed Lincoln and Washington Courts, and the south court in what became Jefferson Court. Yet, as always the case in Sunnyside Gardens, the most remarkable achievement was not so much what was built as what was planned as permanent parkland, and on May 18, 1926, Sunnyside Park opened, “fully equipped with tennis courts, ball fields and children’s apparatus [and] dedicated … to the residents of Sunnyside.” 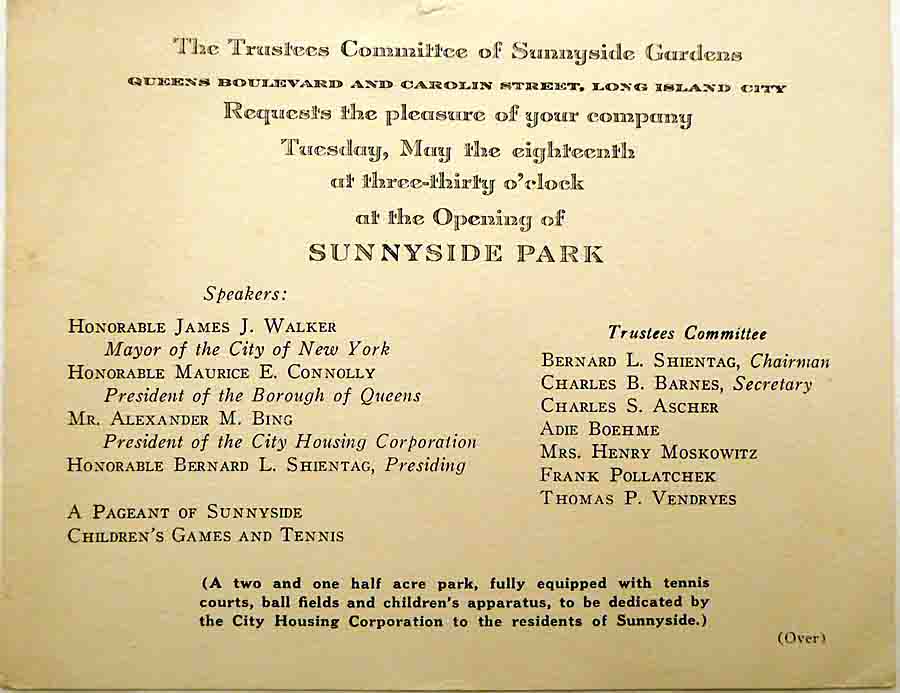 Above: May 18, 2016 is the 90th anniversary of Sunnyside Park, which was inaugurated with a gala ceremony attended by the Mayor of New York and featuring “a pageant of Sunnyside [with] children’s games and tennis.” This is an original invitation, courtesy of Avery Library Drawings and Archives, Columbia University.

Ultimately to provide nearly three acres for the recreation of the new neighborhood, instead of developing this land as housing to be sold at a profit, was extraordinary. No less extraordinary today, Sunnyside Park remains the largest private park in New York City.

The person most responsible for the existence of the Park is Alexander Bing, president of the City Housing Corporation. Bing’s real estate acumen attracted the investors who financed the construction to begin with, and above all it was Bing’s decision to set aside real estate to create Sunnyside Park.

We salute Alexander Bing on Sunnyside Park’s birthday, and we look forward to a ceremony this summer that acknowledges his contribution to Sunnyside Gardens.

Below left: With Sunnyside Gardens completed and Radburn under way, Bing’s City Housing colleagues printed an affectionate booklet of cartoons (an early graphic novella) called “Radburn Rackets.” Probably drawn by someone in Clarence Stein’s architectural office, the cartoon characters, a boy and girl named Sonny Side and Reddy Radburn, celebrated Bing’s birthday, June 22, on the last page. Courtesy of Avery Library Drawings and Archives, Columbia University. Right: Bing in a formal portrait, taken within a year of the Park’s opening.